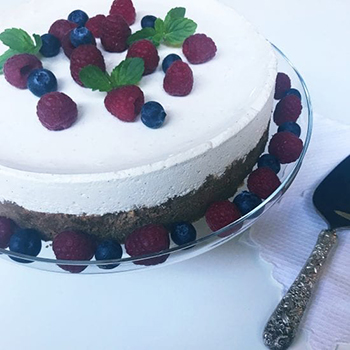 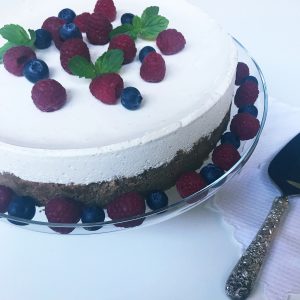 Ok, we have to be honest with you as we don’t often cook with dairy nor pre-packaged cookies for health reasons, but when there is a B-day in either of our homes, we break the rules! This vanilla-y cheesecake has been at the core of our families’ B-day celebrations for decades so we wanted to share it in it’s truesest form. One of these days, we will lighten it up and hand over a dairy-free version, but we do invite you to splurge with us on special occassions with this crowd-pleaser.

Our friend John McCulloch tells us that he literally dreams about this dessert. Now you can deliver the fantasy, too! Ha. If you don’t have vanilla beans on hand, increase the amount of vanilla extract by 1/2 teaspoon for both the filling and the topping.

Position the rack in the center of the oven and preheat the oven to 350 degrees F. Lightly grease a 9-inch springform pan with thin layer of butter or lightly spray with coconut-oil cooking spray.

To make the crust: Mix the graham cracker crumbs, sugar, butter, and kosher salt in a small bowl. Using your fingers, press the mixture evenly into the bottom and one third of the way up the sides of the prepared pan. Bake for 10 minutes. Transfer the pan to a wire rack to and let cool, about 15 minutes. Reduce the oven to 325 degrees F.

To make the filling: Combine the eggs, vanilla extract, contents of 1/2 vanilla bean, and kosher salt in a small bowl. Set aside.

In the bowl of a stand mixer fitted with the paddle attachment, beat the cream cheese on low speed until creamy, about 1 minute. Alternatively, beat with an electric hand mixer on low speed. With the mixer running, slowly add the sugar, then stop the mixer and scrape down the sides of the bowl. Continue beating until light and creamy, about 30 seconds. With the mixer running, slowly add the egg mixture in three additions, scraping down the sides of the bowl after each addition. Do not overbeat; if too much air is incorporated, the cheesecake will crack. Pour the filling into the cooled crust. Put the pan on a baking sheet and bake until the cheesecake is just barely set in the center (it will still jiggle when moved), 45 to 55 minutes. Transfer the pan to a wire rack. Keep the oven set at 350 degrees F.

Meanwhile, make the topping: In the bowl of a stand mixer fitted with the paddle attachment, lightly beat the sour cream on low  speed, about 1 minute. Slowly add the sugar, vanilla extract, contents of ½ vanilla bean, and kosher salt. Beat on low speed until just incorporated. Spread the topping over the cheesecake and bake for 5 minutes. Transfer the pan to a wire rack and let cool, then refrigerate for at least 6 hours or preferably overnight before serving.

Note: To remove the contents of a vanilla bean, using a sharp knife, split the bean lengthwise and scrape out the small seeds. If the bean is hard and difficult to cut, soak it in boiling water until soft, 5 to 10 minutes. When the bean is cool enough to handle, proceed as directed.

Do-Ahead: This is an ideal do-ahead dessert, as it tastes best when made a day or 2 in advance. Keep refrigerated until ready to serve.