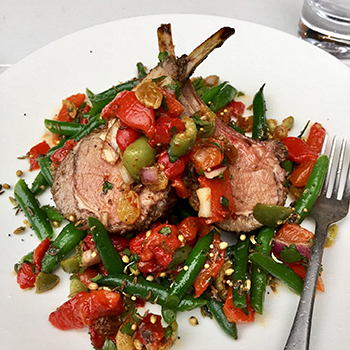 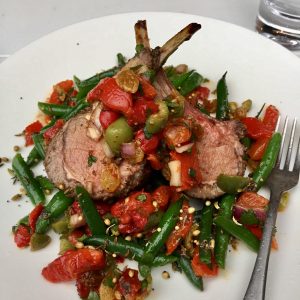 Dress up a rack of lamb with this aromatic spice blend of cumin and cinnamon, paired with golden raisins, olives, and fresh cilantro. This is Mediterranean fare at its headiest and most seductive—great for a dimly lit dinner for two. Try the salsa on grilled chicken, halibut, swordfish, or Chilean sea bass for equally great results. Oh, and feel free to make the salsa a day or 2 in advance for easy weeknight cooking.

Preheat the oven to 350 degrees F. Line a baking sheet with parchment or aluminum foil. Cut 1/4-inch slices off the top and bottom of 2 medium peppers. Remove the stem from the top pieces. Pull the core out of the center of each pepper. Make 1 slit down one side of each pepper and lay flat, skin side down. Using a sharp knife, remove the ribs and seeds. Arrange the pepper pieces, skin side up, on the prepared baking sheet. Press gently to flatten the peppers. Drizzle with about 1 tablespoon olive oil and brush evenly onto the peppers. Roast until the peppers are soft and caramelized, 30 to 40 minutes. Transfer the peppers to a bowl, cover with plastic wrap, and let stand for 20 to 30 minutes, then peel and chop. If all the peeling does not release from the peppers, don’t sweat it.

Increase heat to 450 degrees. Make sure rack is in center position.

Put the 2 tablespoons of the oil in small heavy skillet over medium heat. Add the cumin, cinnamon, and cayenne and stir until fragrant, about 1 minute. Add half of the spice mixture to the bell pepper mixture. Brush the remaining spice mixture on the lamb and season all over with salt and pepper.

Heat the remaining oil in a large heavy ovenproof skillet over high heat. We love cast iron. Sear rack of lamb for 1-2 minutes on all sides. Set aside for a few minutes. Cover the ends of the bones with foil to prevent charring.

Arrange the rack bone side down in the skillet. Roast the lamb in preheated oven for 12 to 18 minutes, depending on the degree of doneness you want. With a meat thermometer, take a reading in the center of the meat after 10 to 12 minutes. Remove the meat, or let it cook longer, to your taste. Let it rest for 5 to 7 minutes, loosely covered, before carving between the ribs. Serve with red pepper salsa.

Note: Although we enjoy the convenience of jarred roasted red bell peppers, when time allows, we prefer to roast our own.