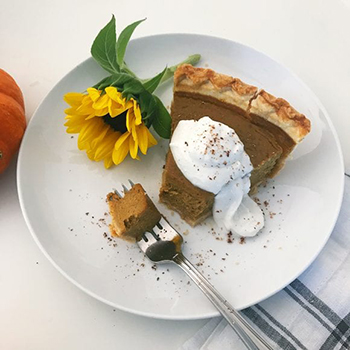 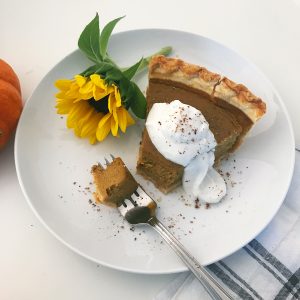 We always made our piecrusts from scratch. That is, before we had 5 kids, combined! Now days, we think nothing of purchasing a prepared crust. We look for those that are gluten and dairy free. One of these days, we will get a homemade crust up on the site, but until then, here is a fast and easy winner of a pumpkin pie for when you’re short on time, but want to bake your pie fresh. FYI: Our baking has evolved over the years in case you have cooked from our previous recipes.  We no longer use refined sugar or gluten and consistently aim for dairy-free alternatives. If you have not tried whipping up coconut cream, we highly recommend that you give it a whirl. It is delish, but if you need to simplify, there are non-dairy toppings available in the freezer section of your market that serve as a fine substitute.

3 eggs, plus one yolk

Quick Reminder: Store a can of coconut milk upside down in the refrigerator overnight or for about 12 hours, for coconut cream.

Remove frozen piecrust from the freezer to thaw for about 15 minutes. Preheat oven to 375 degrees F. Position rack in the center of the oven.

Press two 12-inch squares of parchment paper or aluminum foil  into the pie shell so that the foil covers the edge of the crust. Add about 2 cups raw beans, rice, or metal pie weights. Set the crust on baking sheet and bake for about 12-15 minutes, just so that the crust gets partially cooked before adding the filling. Carefully remove the foil and weights, or rice, and set on a rack. Return the pie crust back to the oven for 5 minutes, so that the center of the crust gets cooked. This will prevent it from getting soggy.

Add the pumpkin, coconut milk or almond milk, maple syrup, vanilla, salt cinnamon, ginger, nutmeg, cardamom, and cloves in a large bowl. Whisk vigorously until spices are evenly dispersed. Whisk the eggs and yolk together in a separate bowl and add to  the pumpkin pie mixture. Place pie shell on the baking sheet and fill the shell to the rim with the pumpkin mixture. (Depending on the pie shell and the dish, you may have as much as 1/3 cup of the pumpkin mixture left over.)

Cook for about 45-55 minutes. The filling will still jiggle in the middle when moved. (Keep an eye on the pie as it may be necessary to cover the pie loosely with foil if the crust or the filling is getting dark prematurely.) Transfer the pie to a wire rack and let cool completely.

In case you have not already stored a can of coconut milk upside down in the refrigerator overnight or for about 12 hours, go ahead and do it! The fat coagulates differently from brand to brand. We recommend trying this before T-giving day, so that you know your brand works. (Whole Foods and Thai Kitchen brands have not worked for us in the past while Native Forest has worked consistently. Also, Chaokah is the richest and most decadent brand that we have used and it works consistently, but it’s harder to find and contains preservatives:( Also, it is a good idea to chill the mixing bowl and whisk attachment in the freezer, though 15 minutes will be sufficient.

Just before serving the pies, remove the can of coconut milk from the refrigerator, turn it upright and open. Remove the thick cream and place in chilled bowl. (Reserve the liquid for smoothies later.)  In the chilled bowl of a stand mixer fitted with the whisk attachment, beat coconut cream on high speed until soft peaks form, about 2 minutes and add the maple syrup. The cream should slowly fall over forward when lifted with a whisk. Alternatively, use an electric hand mixer. Garnish each slice of pie with a generous dollop of the whipped coconut cream.